Enjoy a mix of history, culture, and architecture as we tour Grand Rapids. Learn about what makes this city so unique with stories from its past and present. See the iconic sights and learn about the famous figures that have put this city on the map, The Waters Building, the Gerald Ford Presidential Museum, La Grande Vitesse sculpture, and more! Learn about the social groups and various cultures that helped shape the city as we hear about immigration throughout the centuries.

Visit Gerald and Betty Ford’s burial site overlooking the city they both loved so much.

Discover the history of Native Americans in Grand Rapids and the European immigration waves of the 19th and 20th centuries.

See the buildings which pioneered the furniture production that gave Grand Rapids the name ‘Furniture City’.

Stand over the river to relive the largest logjam in history that took a bridge we’ll walk across.

Hear about a local mob boss and the downtown building named after him.

What You'll Do & See 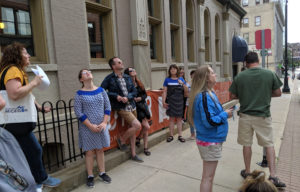 Soak up our city’s rich history as we stand where the Grand Rapids’ first settler had his fur trading post. These days, a building named after an infamous mob boss and political leader, McKay Tower, takes its place and you’ll learn the story behind it all. Moving away from Greek Revival architecture, we’ll move on to spot what was once the tallest building between Detroit and Chicago. We’ll continue our tour as we head over to one of West Michigan’s most iconic buildings, The Waters Building, the world’s largest building dedicated to furniture exhibition. Here we will learn how the ‘Furniture City’ got its name.

Learn about the people who made the city what it is today and the social groups that shaped and influenced Grand Rapids society. We are proud to have thousands of years of Native American history spread out along the banks of the river and in the 19th and 20th centuries, Grand Rapids saw waves of immigration from the Dutch, French, Polish, and Germans. As industries grew, people from all over the world, and other parts of the U.S., flocked to the city to find work and flee oppression. Grand Rapids’ rich heritage continuously becomes more diverse as our community attracts the best minds in science, innovation, the arts, and entrepreneurship. 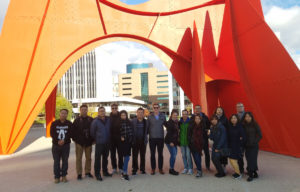 Finally, we will discover Grand Rapids’ affinity with culture and the arts as we stroll through the city. Spot the many murals which line our streets thanks to the festival/competition ArtPrize. We’ll also learn about the inspiration that led to Maya Lin creating her famous Ecliptic in Rosa Parks Circle in the heart of the city. And we can’t forget La Grande Vitesse, Alexander Calder’s 43-feet high red sculpture. This sculpture was the first public work of art funded by the National Endowment of the Arts and we’ll fill you in on the initial controversy it caused upon its unveiling.

We are constantly researching our tours to find new stories about our fascinating city. We can guarantee you won’t be disappointed! 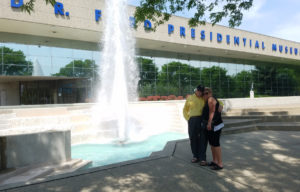 See What Our Previous Guests Have Said...

Candice was a great tour guide and storyteller. The tour was about 90 minutes and jam-packed with Grand Rapids history. It was a very enjoyable way to start off our trip, would definitely recommend it.

I wasn’t sure what I wanted to see in Grand Rapids or Holland, but Candice knew all the must-see experiences around town. Candice was a great tour guide. Her passion for the Grand Rapids area comes through every step of the way. 🙂

I took a 90-minute walking tour of Grand Rapids with Candice. It was great! She is knowledgeable, professional, and lots of fun! It was just the two of us, and she had so much information to share. I learned a lot about Grand Rapids’ past, present, and future.

I thought I knew Grand Rapids until I took this tour. Candice’s knowledge of and tour through Grand Rapids was completely amazing and intellectually satisfying! This city has a very interesting history and has been a trailblazer throughout its existence.